Remember a couple of weeks ago, when Senator Chuck Grassley suggested the #TrumpTaxScam would give money back to people who invest it instead of spending it on booze and women and movies? (Put the sexism aside for a minute, spending your money on booze and movies is called “participating in the economy.”) Well, we decided we wanted to give the deeply out of touch Grassley an idea of how regular Americans spend their money. So we surveyed our Facebook Group members, and got 81 responses. We admit, we did a poor job of structuring the survey to provide clean results, but we still think there’s important information to be had here, about the challenges people face when trying to draw up a budget. 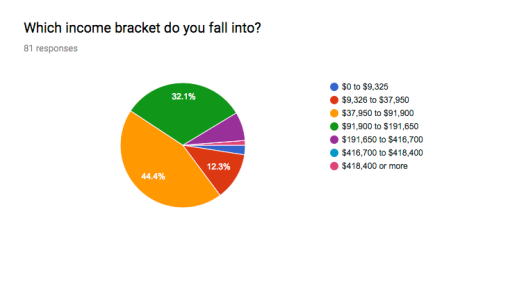 Next we asked about living expenses, and our folks were kind enough to tell us what they spend on rent/mortgage. Somewhere between $1,200-$2,200 seems to be most common–though a few people reported spending nothing for housing, and someone reported spending a whopping $8,100 (we’ll assume they aren’t in the blue, yellow, or green slices of pie pictured above).

Over 30% of people who answered are repaying student loans–and soon they won’t be able to write off the interest they pay on those loans.

This is a messy chart (blame my poor survey design abilities) but you can see how wildly these numbers vary. This is New England, we all need heat to survive the winter. One person reported spending anywhere between $450 and $800 depending on the season (which nearly made me choke), but somewhere between $300 and $400 seems to be the norm.

Next we asked how much people spent per month on groceries and household necessities (think soap and toilet paper). I was shocked by how many people said they spend more than $1,000 in this category. Somewhere around $400-$500 was also common.

Next we moved on to healthcare. One lucky person had healthcare included in their pension. But others weren’t so lucky. One person reported spending $1,200 per month. Someone else was paying out $1,500 per month. Another member pays $600 per month with a $5,000 deductible.

Childcare is costing some people with just one child over well over $1,000 per month. We had one report from someone paying $2,700 per month, and another who shells out $3,800. But this category ranges wildly. Some people pay $200 per month, while others pay $300 per month just for 2 days a week at daycare. (I have to say, it boggles my mind that anyone can afford any of this.)

Here’s a chart that should be sobering… 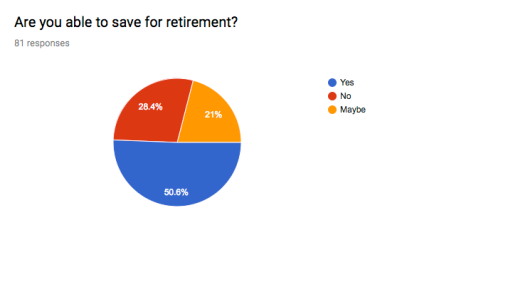 Additionally, 51.6% of respondents said they are unable to invest beyond their retirement accounts. These two investment related statistics more or less mirror the national figure that says 52% of Americans are not involved in the stock market in any way (a figure you should point out to anyone who repeats Trump talking points about stock markets going up).

Finally, we asked our members to tell us what other fixed expenses they had that we didn’t think to ask about. Here’s some of what they said: